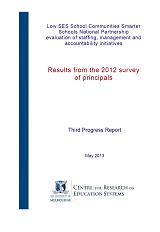 Summary:  The aim of this report was to identify the extent to which Staffing, Management and Accountability reforms had been implemented as part of the Low Socio-economic Status School Communities National Partnership and the perceived effectiveness of these reforms. The evaluators surveyed school principals from participating schools, with a response rate of 59 per cent across government and non-government schools. Most schools (97%) reported implementing at least one initiative from one of the five reform areas under investigation. A very high proportion of principals (97%) reported implementing reforms that provided innovative and tailored learning opportunities. While still high, principals were less likely to report implementing incentives to attract high performing teachers and principals (77%) and adopting best practice performance management and staffing arrangements (75%). Principals reported that the reforms were effective. The reforms that were less likely to be implemented were also viewed as the most effective initiatives to bring about school improvements. 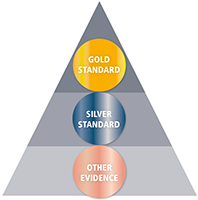 The evidence hierarchy is used to classify each evaluation.

If you find a CESE publication is not accessible, please contact us.