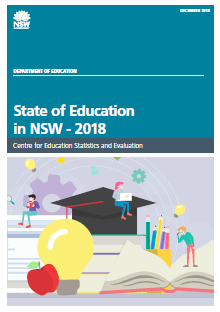 - over 100,000 children were enrolled in a preschool program before starting school

- preschool enrolments for Aboriginal and Torres Strait Islander children increased (by 26.3% since 2016).
- Around half of teachers delivering a preschool program were university trained.

• In 2017, the proportion of students achieving in the top two NAPLAN bands in numeracy and reading has increased for all cohorts, compared to 2013/14 baselines.
• High school retention rates are improving for all students, but especially Aboriginal and Torres Strait Islander students.
• In 2017, the average school attendance rate in NSW was 94% for primary students and 91.1% for secondary students. Attendance rates are lower for Aboriginal and Torres Strait Islander students, and the gap increases in secondary school.
• Students can study VET in school as part of their HSC – in 2017, around 30% of HSC achievers also received a Certificate Level II or above qualification.

If you find a CESE publication is not accessible, please contact us.